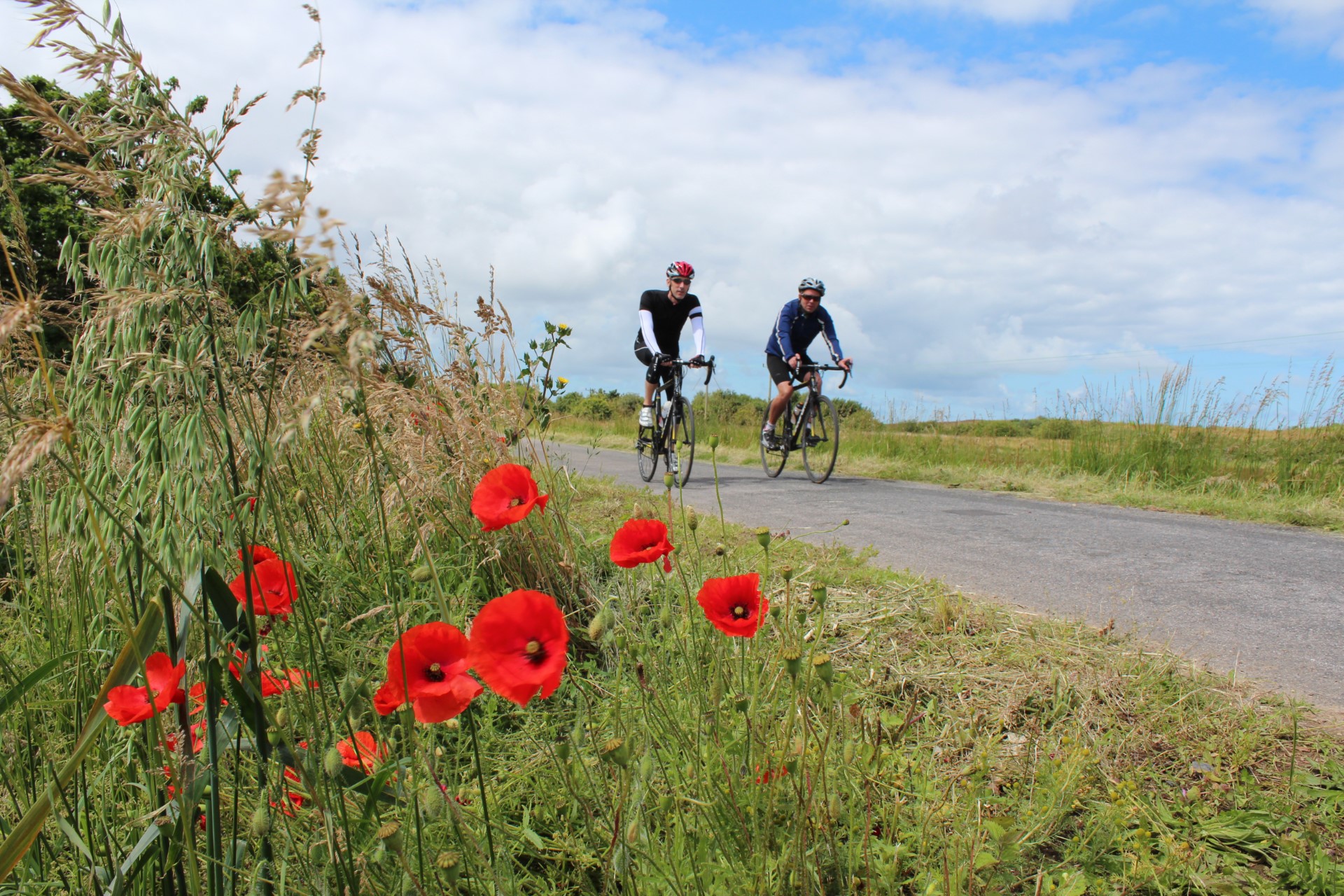 HomeInspirationOn your bike in North Devon

On your bike in North Devon

Saddle up for an unforgettable ride through North Devon and Exmoor.

North Devon is very popular amongst cyclists of every standard right up to the elite group as shown by a stage of the Tour of Britain stage taking place in North Devon for the past 2 years. The stunning scenery and undulating landscape make the region perfect for a pleasant bike ride or a gruelling trek across the hills of Exmoor as they roll down to the sea.

There are loads of cycle clubs and organised races and long-distance challenge rides throughout the year but you don’t have to join a club to enjoy cycling in North Devon, a bike and the will to get out and enjoy the ride is all you need.

One of the most notorious cycling challenge rides organised every year is “The Smuggler Cycle Sportive”. The Smuggler is an epic journey through some of North Devon’s most stunning scenery, it starts and finishes in Barnstaple where riders are served an energy enhancing breakfast to help them get up some of the steepest and longest hills in the country. The route takes the riders out through Swimbridge and past Filleigh cricket ground and then up to Exmoor via the gruelling Brayford climb and then down to Simonsbath where riders get a well-deserved food break.

There are 3 routes, the 40mile, 50 mile and 80mile and it’s at Simonsbath where the routes split. The 40m heads back to Barnstaple, the 50m goes over Exmoor to Lynton and the steep climbs at Barbrook and Lee Abbey Toll Road, the 80m heads to Exford and Dunkery and then the stunning Porlock Toll Road and meeting up with the 50m route and after tackling Barbrook and the Valley of The Rocks, the riders head back to Barnstaple.

However, you don’t have to put yourself through the “Smuggler” to enjoy the delights of North Devons cycling routes. You just get on your bike and head off, inland to Exmoor or out to the coast and cycle along the coast road.

The most well known route in North Devon is the Tarka Trail which forms a figure of eight, the southern route being the one most usually associated with the Tarka Trail and runs from Barnstaple to Meeth along a 30 mile stretch of unused railway, making it the longest stretch of free cycling in the country. The route starts in the ancient market town of Barnstaple and heads out to Meeth in one direction via Instow, Bideford, Torrington and finally to Meeth and in the other direction, towards the coast at Braunton. These two stretches of the trail follow the old railway line and offer cycle only paths whereas the rest of the route as far as Okehampton and back up through North Tawton and High Bickington is on a mixture of bridle paths and roads.

The Northern route takes a circular route from Barnstaple via Braunton around the coast to Croyde, Woolacombe, Ilfracombe and Lynton then up to Exmoor and Simonsbath then back to Barnstaple via Charles and Landkey.

There are loads of cycle routes all available online and it’s easy to work out a route depending on your level of fitness and ability as most maps will also show the elevation along the route which is useful when cycling in North Devon.

Many routes will take in parts of others and anyone brave enough to have a go at The Smuggler will probably cycle along most of the routes available. The coast road from Braunton all the way to Porlock and beyond offers some of the most striking coastal scenery you will find anywhere in the UK as well as some of the most challenging climbs. The road out of Lynmouth up to Countisbury is very steep but worth it when you reach the top and cycle along the coast road to Porlock with incredible sea views across to Wales. Alternatively, you could turn off at Lynton and head across to Simonsbath along the River Exe, again breath-taking scenery but some tough climbs.

So there is something for everyone, the Tarka Trail provides 30 miles of fairly level, car free cycling and the coast-roads and routes over Exmoor provide moor challenging cycling up and down the classic North Devon hills.

Booking with confidence after Coronavirus

This has been a horrible year for booking a holiday cottage! But we're keen to give you the confidence to book ahead for 2021

Things to do at Easter around North Devon and Exmoor

A few of favourite Easter events in North Devon that you shouldn't miss out on...

Top reasons to get away this Autumn to Devon and Exmoor

With the summer holidays already feeling like a distant memory, autumn is the perfect time for a relaxing break or treating the kids to a half term break...

The Milky Way named 2nd in UK by Trip Advisor

Huge congratulations to our local attraction, The Milky Way Adventure Park being awarded by TripAdvisor - The Traveller Choice Award for the 5th year running.