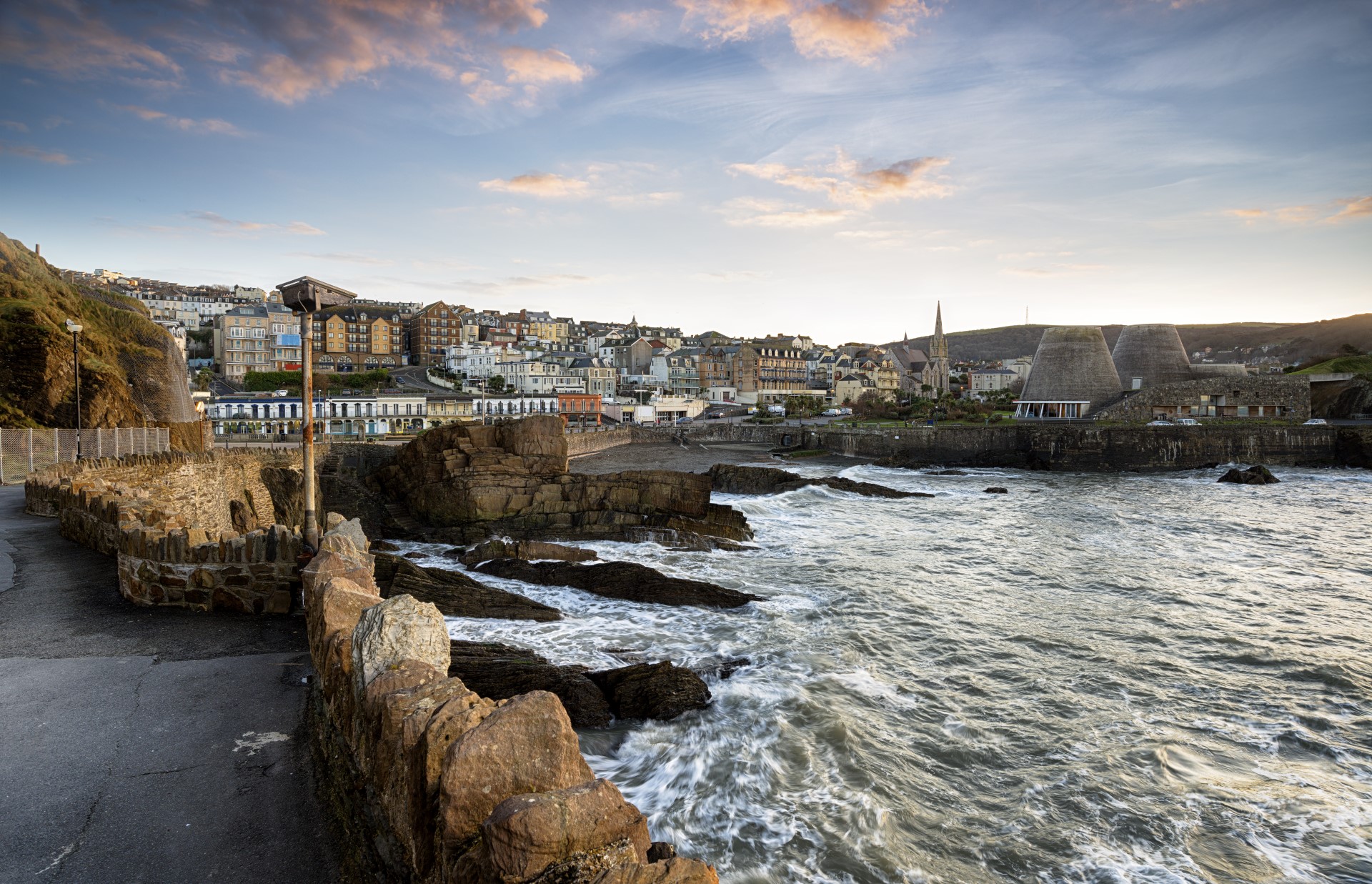 What Can We Do in Ilfracombe?

Where Can We Stay in Ilfracombe?

Ilfracombe is a friendly town with a bustling harbour, sandy beaches, sea-pools, art galleries and graceful Victorian architecture. It lies on a rocky stretch of the North Devon coast with Exmoor National Park to its east and the sandy surf spots of Croyde, Saunton and Woolacombe to its west. The town is surrounded by craggy hills and headlands which provide spectacular views of the harbour and Atlantic Ocean beyond. Ilfracombe is packed with historical landmarks such as Britain’s oldest lighthouse and hillside manors and hotels dating back to the Victorian era, when holidaymakers travelled from far and wide for a break by the ocean. Ilfracombe is an atmospheric destination for holidays in North Devon, with bracing sea air, fishing boats bobbing in the harbour and a variety of restaurants serving seafood straight from the Atlantic. Take a stroll around the town and you will discover independent shops, nostalgic seaside amusements, a thriving farmers’ market, an excellent aquarium and a striking sculpture by Damien Hirst, gazing out to sea at the Quay.

There’s loads to do in Ilfracombe, including sea safaris, swimming in tidal pools, following the Fish Trail and enjoying the town’s flourishing arts scene. Take a wildlife cruise on the Ilfracombe Princess, book a trip to Lundy Island on MS Oldenburg or take the family to Combe Martin Wildlife and Dinosaur Park, home to wolves, lions, meerkats and remarkably lifelike animatronic dinosaurs. Ilfracombe is a great place for a night out, too, with an eclectic programme of shows at the Landmark Theatre, renowned restaurants such as Damien Hirst’s the Quay, atmospheric pubs including the Ship and Pilot and live music at Chill Bar.

The coast and countryside surrounding Ilfracombe are a paradise for walking, with rolling hills, ancient woods, towering cliffs and sweeping, sandy bays. The Southwest Coast Path passes through the town, with breathtaking views across the Atlantic, towards Lundy Island. Take a stroll on the path and you will discover a rugged coastline with a history of smuggling and shipwrecks. Head west and you will soon reach Lee, a peaceful village in a lush valley, with a dramatic cove where low-tide reveals a maze of rockpools. Heading east, you will descend to the sandy beach at Hele Bay, where you can stop for a coffee at a seafront café before continuing on to Watermouth and the charming resort of Combe Martin.

Ilfracombe is famous for its traditional festivals, many of which have been held annually for centuries. Victorian Week is a chance to see locals parading in a variety of period costumes, May Day involves a brilliant Greenman Parade and dance around a May pole. And Birdman sees competitors attempting to fly by throwing themselves off the pier with a range of weird and wonderful contraptions. Ilfracombe also hosts a beer festival, bike show, carnival, street food festival and gig regatta, so remember to see what’s on during your stay.

Ilfracombe is perfectly located for day trips to some of North Devon’s most spectacular locations. To the town’s east, Exmoor National Park is an enchanting expanse of wild moors, woods and fields, where the twin villages of Lynton and Lynmouth cling to the sides of a steep valley overlooking a rocky bay and harbour. A few miles west of Ilfracombe, Woolacombe, Croyde and Saunton are vast, sandy beaches, backed by dunes, where you can while away a day sunbathing, building sandcastles or surfing.

Until its development as a resort in the Victorian era, Ilfracombe’s economy was mostly based on maritime activities including fishing, importing lime and coal from Wales and international trade with the West Indies, West Africa and others. Ilfracombe has a long history as a safe port, thanks to the natural layout of its harbour. In 1208, it was used by King John to launch an attack on Ireland, in 1247, it supplied a ship to the fleet sent to invade Scotland’s Western Isles, and six ships with 79 men were sent to support the Siege of Calais. The building which stands on Lantern Hill, overlooking the harbour, has had a light or beacon for more than 650 years and is said to be the oldest lighthouse in Britain. Novelist Fanny Burnley stayed in Ilfracombe in 1817, and her diary paints a vivid picture of life in the town at the time, including the capture of a Spanish ship, vessels in distress during a storm and her narrow escape from becoming cut off by the tide.

In the 1820s, Welsh miners hand-cut tunnels through the cliffs to create access to Ilfracombe’s beaches by foot and horse-drawn carriage. The tunnels led to a pair of tidal pools for swimming, one for men and the other for women. Women were expected to adhere to a strict dress-code while men usually swam naked. Ilfracombe became a popular resort in the mid-20th century, with a railway to Barnstaple and ferries up and down the Bristol Channel. During the 1950s, the demand for people to work in tourism was so great that employers regularly advertised vacancies in northern cities such as Manchester and Liverpool. Ilfracombe’s architecture encompasses a wide range of styles, from the 13th century to present day. The period from 1830 to 1900 saw the construction of many mansions and hotels, giving Ilfracombe a Victorian character which remains visible in many buildings today.

How Do You Get to Ilfracombe?

Driving to Ilfracombe from London usually take roughly four hours. Approaching from the south or east, follow the M5 to the exit for the A361 for Tiverton and Barnstaple. Follow the A361 through Braunton and take the second exit signposted for Ilfracombe at Mullacott Cross. Alternatively, take the A39, which follows a slower but scenic route through Exmoor National Park, and turn right onto the A399 at Blackmoor Gate. Driving from the south, take the A39, A386 or A377 to Barnstaple and follow the above directions from Barnstaple to Ilfracombe.

Coaches run from London to Ilfracombe via Bristol, with good connections to the rest of the UK, and take approximately six hours. Trains run from Barnstaple, which is a short local bus ride from Ilfracombe, to Exeter, with connections to London, Bristol, Cornwall and beyond.

Ilfracombe’s closest airport is Exeter, which is roughly 90 minutes by car and offers flights to various European cities. Bristol Airport is roughly two hours away, with a greater range of routes. Travellers from further afield may need to fly to London and hire a car or use public transport to get to Ilfracombe. Heathrow is London’s most convenient airport for travelling to Ilfracombe.

Ilfracombe is a popular stop for walkers on the Southwest Coast Path. Approaching from the west, walkers will pass the sandy beaches of Croyde and Woolacombe, and the villages of Mortehoe and Lee Bay, before arriving in Ilfracombe. From the east, Lynton, Lynmouth and Combe Martin in Exmoor National Park will be passed on the hilly approach to Ilfracombe.